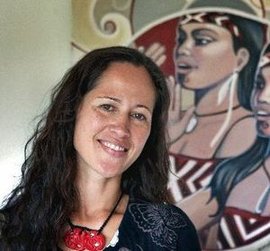 Angela Swann-Cronin is a Rotorua based pilot, artist, and guest speaker of Maori descent (tribal affiliations include Ngati Porou and Rongowhakaata). Born and raised in the popular tourist town of Rotorua, Angela made her mark in history as the first, and to date the only woman of Maori descent to become a pilot in the Royal New Zealand Air Force (RNZAF). Her military flying took her from one end of the globe to the other literally.

From the generous flight deck of the C130 Hercules Angela has visited places such as Antarctica, Afghanistan, and the Arctic and much of what’s in between. Angela has been painting most of her life and early influences include Chagall and Jane Evans. Over the years she has developed a self-taught style that is uniquely hers with organic themes as varied as Maoritanga and surfing. She aims to capture the spirit of a moment through colour and symbolism.