Writing bios always feels to me like the proverbial Impossible Task.

Where to start? I immigrated to New Zealand from South Africa in 1994. One of the first Maori words I was introduced to here was Tūrangawaewae – ‘a place to stand’. Its meaning entered my body and reverberated. In some inexplicable way, landing in Dunedin felt like coming home; a recognition or confirmation of sorts – and, too, a covenant. Ours was going to be a long and significant relationship.

From a very young age, my encounters with ‘place’ have tended to be surprising, enduring and powerfully affecting. I like to think of people – each and every of us – as capacious enough to accommodate an accumulative, ever-expanding landscape; our experiences of people and place do not enter then leave – rather they become inscribed in us so that we become resonant with interior mountains, oceans, skies and soundscapes – palimpsests of history and ever-renewing stories.

“If we are to be properly humble in our use of the world, we need places that we do not use at all. We need the experience of leaving something alone. We need places that we forbear to change, or influence by our presence, or impose on even by our understanding; places that we accept as influences upon us, not the other way around, that we enter with the sense, the pleasure, of having nothing to do there; places that we must enter in a kind of cultural nakedness, without comforts or tools, to submit to rather than to conquer. We need what other ages would have called sacred groves. We need groves, anyhow, that we would treat as if they were sacred, in order, perhaps, to perceive their sanctity.”

Moments I’m grateful for in sanctuaries I bow to –

Du Toit’s Kloof (Cape, South Africa): “. . . the black mountains flanking the river like sentinels came alive with flocks – not swarms – of fireflies. They were big as birds erupting like fireworks in the moonless sky. I’d not seen anything like it before – and haven’t since. For an hour or so – though timeless in the way such moments are – we watched their frenzied mating display; their light pierced rock; in their fervor it seemed they might be capable of dismantling mountains. I have never forgotten the force of that extended moment, its mystery and magic.”

My garden in Ravensbourne, Dunedin (where visiting birds bring daily joy): “. . . And then I saw it – a tiny, airborne estuary; a vapour drawing; the tuis’ song momentarily visible in air. I could almost reach out and touch their clacks and trills, their rattling flourishes and chest-filling tributaries. It was like watching steam escape from a teapot’s spout; birdsong on the boil, a micro-storm brewing in the fork of the old macrocarpa tree. . .”

Explorers Cove, Antarctica: “In this place, silence has a voice. People say it’s on the cusp of madness, the way it hums and stutters, mutters to itself in quietest tones. Rocks stand mute, but the ice has an infinite repertoire of sounds. I have only to kneel amongst the cracks and fissures to tune into its songs… And as for all this white? White is no more than an illusion – a thinly veiled disguise. Beneath it, the continent is a dressing-up box of endless surprise. This is a place of extremes and contradictions. Honesty and deception compete for supremacy in a land that’s devastatingly harsh and destructive one minute, magical and seductive the next…’

I am a slightly indiscriminate and giddy lover of ‘all creatures great and small’. I love birds and elephants, turtles and crabs, chameleons, giraffes and warthogs. And Antarctica, I fell in love with a species of microscopic unicellular aquatic organisms named foraminifera, referred to affectionately by the polar scientists and I as ‘nature’s little masons.’ A whole new world opened up to me beneath the lens of the microscope.

As a child, the first poem I transcribed in to a notebook (illustrated, then committed to memory) was Christina Rossetti’s Hurt No Living Thing –

Hurt no living thing:
Ladybird, nor butterfly,
Nor moth with dusty wing,
Nor cricket chirping cheerily,
Nor grasshopper so light of leap,
Nor dancing gnat, nor beetle fat,
Nor harmless worms that creep.

We are privileged to live in this remarkable world at such a pivotal period in history. We are also challenged to see the collapse that’s taking place on every conceivable level – ecologically, economically, ideologically, politically and socially – and to take up new positions of responsibility.  Gone are the days of solo enterprise; we have entered a period of rich collaborative opportunity in which the whole depends on the ‘hum’ of the parts.

I was recently invited to speak on the subject of Creative Living at a conference in Phoenix AZ. Never before has there been such an urgent call to live creatively in the interests of shifting our global situation from one of malady and gravity to one of love, hope and compassion.

These are some of the thoughts I shared —

Creativity is not the domain of the few; it is every man’s home, every woman’s forge; it is humanity’s crucible and sanctuary. It is everywhere we are. It is presence and availability, courage and humility. It is knowing and not knowing. It is being grounded and it is soaring. It is silence and speech. It is listening – to, for, with and on behalf of each other. It is notes and the space between notes. It is grit. It is grace.

Creativity combines trial and error, imagination, and a kind of freedom that ultimately enables us to re-configure what was – or what might have been – into something that is, and that is new. Living creatively matters not only to dancers, poets and painters, but to every person who longs to see something change, to experience the hope of new possibilities. The farmer who has just ploughed his field will look back at the neat rows of furrows with the same pride as Mark Rothko might have done after completing a painting and laying down his paintbrushes. The way we stack plates on the draining board or hang the washing on the line can be infused with the same creativity and attention to detail as a biologist applies to species selection under the lens of the microscope. . .”

This poem – written whilst in Antarctica in 2005 – speaks of more than the breath-holding experience of walking on cymbal-thin ice. It is a summary of the creative process –

Step
out
onto
white
not
as
a
body
bearing
any
weight
but
as
a
feather
might
think
of
ink
in
a
quill
drawing
a
cantata
out
of
light. 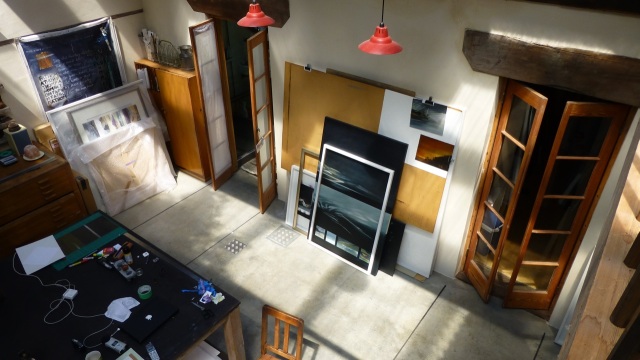